When my friend Colin called me to ask if I’d like to play percussion for a choir and orchestra spoof of Call Me Maybe with a bunch of other friends and fellow musicians from New Haven, of course I said yes.

He then added that we’d be auditioning for the first round of America’s Got Talent, and very well might end up on national television. A bit of a change from the church services we had been playing together for a number of years.

It’s still somewhat unbelievable to me, but that group, the?3 Penny Chorus and Orchestra,?played our audition in NYC and were unanimously voted on to the Vegas round, complete with a surprising standing ovation from Howard Stern. Here’s?the clip. In Vegas, members of our group walked out on stage?to get?the news?(starts 3m30s) that we would be advanced to the next round and play a live, nationally televised show at Radio City Music Hall. So… 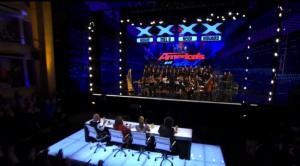 I’ll be performing with the 3 Penny Chorus and Orchestra?TOMORROW NIGHT,?Tuesday, August 13th 9pm/8pm central on the LIVE NBC broadcast of America’s Got Talent from Radio City Music Hall, and?I’d love for you to watch!?(can you tell I’m excited?)?You’ll need access to a TV to watch (I don’t think they are live streaming) — try a friend’s house, a bar/restaurant or another community space if, like me, you don’t have a TV. If you liked Call Me Maybe, you’ll love what we’ve got planned for this go around.

This is also the round where?the viewers vote for who advances. From the beginning, we’ve been in this to have fun, make good music and enjoy the adventure — I don’t think any of us are in this for fame or fortune, but it’d sure be a blast to continue this adventure. If you like our performance,?will you vote for us?Tuesday night 8/13 between 10:55pm and 6am Eastern Time?the next morning?

Apparently, each person is allowed to vote up to 21 times (10x via email, 10x via the website, 1x via twitter), so if you really liked the show, go wild! Voting information below.

3Penny Chorus and Orchestra has made it to the live rounds on America’s Got Talent – and we need YOUR votes! Please read this section for details on how to vote, how to get tickets, and when to watch!

WHERE: On your local NBC channel, or in person at Radio City!